Meat Abolition, or the Closing down of All Slaughterhouses

The idea expressed here1 is that we must now work explicitly towards the banning of the production and consumption of animal flesh. It is both a necessary measure, and one possible to obtain without waiting for a revolution in the way of thinking or the organization of our societies. This idea led to the organization for about ten years of the World Days and then the World Weeks for the Abolition of Meat, and then the Marches for the closing down of all slaughterhouses.

“Animals should not be harmed or killed unnecessarily”: throughout the world, this precept is part of common morality. Throughout the world, the consumption of animal products for food is the main reason why humans harm and kill animals, unnecessarily. The aforesaid precept is not without consequence: some people refuse to consume products of animal origin, others reduce their consumption of meat, still others choose products from farms that offer some guarantee on how the animals are treated; some countries pass laws protecting farm animals. But this is not enough to reverse the trend: the number of animals raised and fished in the world is growing inexorably, whilst industrial farming becomes the norm. It is illusory to wait for laws protecting animal welfare to finally ensure decent living and dying conditions for the billions of animals eaten every year: it is difficult for farmers to decide to place the well-being of their animals before the profitability of their farm, and there is neither enough space nor a big enough workforce to properly care for so many animals.

Recognising the fact that the production of animal flesh has a disastrous environmental impact will not necessarily lead to an improvement in the allotted fate of animals: if the animals’ interests are not taken into account as such, this recognition may, on the contrary, lead to more intensive farming.

The contrast between the obligations that humans recognise having towards animals, and the way in which they actually treat them, does not imply that their declared good intentions are just hypocritical. What we learn from this contrast, however, is that spontaneous changes in consumer behaviour are not sufficient to put an end to the butchery. There are reasons for this. The situation is familiar: the problems of road safety, pollution, human poverty or child abuse cannot be solved just by relying on the capacity of each person to modify their habits to remedy the situation, even when they are generally acknowledged to be wrong.

To bring to an end the hideous fate reserved for animals that are eaten, the question should also be asked on the political level. A process must be begun which will finish by laws being passed to ban predation (hunting and fishing) and production (farming) of animals for human consumption. Public institutions have also a role to play in the retraining of workers whose incomes depend on these activities. This process begins by the public expression of the demand for the abolition of meat.

Making the abolition project part of the world today

Does the movement for meat abolition reduce its chance of becoming a political issue by the long-distance nature of its demands? No parliament or government will decide to prohibit the use of animals as food in the near future; no big political party of our time will put it on its programme.
Consequently, if the movement is seen as demanding nothing less than the event which will seal its success (i.e. total abolition), it runs the risk of having little influence on the current themes which make up day to day political life. However, there is no reason why it should be like this. There are a host of partial measures which are consistent with the march towards abolition, such as: reduce and eventually end the subsidies to livestock farming and fishing, put a tax on meat, impose respect for the right to not eat meat (possibility of meals without animal products in school and work canteens and other community restaurants), discourage young people from entering the livestock and fishing trades (and all associated trades), prevent the opening or extension of livestock farms, refute propaganda that presents animal products as indispensable to our health, or obtain the prohibition of the production and importation of certain kinds of meat which have been produced in particularly atrocious conditions. Businesses, distribution networks, and private individuals can create non-meat zones on their own territory.

Supporting meat abolition does not necessarily imply cutting all ties with those who are working towards improving farming conditions and protesting against factory farms2: they are one of the expressions of the attention given to animals in our societies; in fact, to attack factory farming is to attack practically all livestock farming. In the field, many different points of convergence are possible, as long as they don’t encourage people to believe the illusion that widespread animal well-being will soon be the norm in livestock farms.

The demand for meat abolition does not push to the background the information effort directed at consumers so that more and more of them will refuse to buy animal products. The aim is not to prefer a more “collective” approach to the problem. No collective evolution can be created other than by winning the support of the individuals who make up society. The aim is to communicate with individuals as consumers and citizens, so that the two approaches are mutually strengthened.

The animal organisations have already undertaken to act on the different levels where decisions are taken: private individuals, political institutions, other organisations (businesses, research institutes, associations, etc.). The task of the movement for the abolition of meat is not to propose an upheaval in the methods employed or the campaigns waged, even if new themes are added. Its primary task is to facilitate the reinterpretation of a multitude of approaches already in place and to associate new actors. Beyond their immediate objective, many of these actions will make sense as being steps towards the abolition of meat, because this horizon will have been explicitly fixed and will have entered the public arena as one of the serious candidates for the role of the possible future.

Abolition will not creep up on us, taking little steps at a steady pace. Rather there will be an acceleration and a “jump” with the straight out adoption of abolition. But before that day, many partial measures may represent signs (and effective progress) that make the idea ever more credible, more tangible, that we are bending towards the abolition of meat. They are preparing the acceptance and the willingness to end the sacrifice of animals for the purpose of eating them.

The movement for the abolition of meat is also about speaking out: it exists because individuals and organisations declare themselves in favour of the prohibition of the consumption of animal flesh. It exists because this belief is seen as something more than a pious wish for a better world which is not destined to come true. 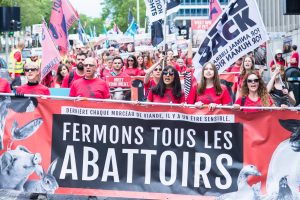 Feet on the ground, head in the stars

Meat abolition is a reformist approach. There is no need to revolutionise beliefs and social relations from top to bottom so as to install a radically new order. This is about bringing an operational response to a concrete problem: the hideous fate reserved up until now for animals that are eaten. Moreover, meat abolition helps safeguard habitats that are necessary for wild animals; it contributes to the solution of food and health problems concerning humans, as well as the preservation of the planet in the interest of its future inhabitants.

What is utopian is not abolishing meat, but thinking that we are progressing towards a guarantee of decent living and dying conditions for animals that are bred for food, hunted or fished. This idea is surreal – all the more so in a context where controlling environmental damage caused by rapidly expanding meat production is likely to become a supplementary factor for intensifying farming.

Although limited in its objective, the project for the abolition of meat aims at nothing less than the greatest reduction of suffering and death ever achieved. By its aim and the means to achieve it, it opens the way to a civilisation that is more attentive to all sentient beings affected by our choices. At the end of the journey, what we find may not be paradise; but, considering the limited nature of the demand, it won’t be too bad.

Estiva Reus joined Les Cahiers antispécistes in the 1990s, before becoming its main editor and publisher until the journal stopped publishing in 2019. With Antoine Comiti, she is one of the people who created the first abolitionist campaign, against foie gras, and who then created the most important antispeciesist organization in France, L214. With this article, they both played an important role in promoting the “meat abolition” strategy (which L214 later renamed “closing down all slaughterhouses”). Antoine Comiti maintained a blog in French, English, Spanish, Portuguese, Italian and Turkish entitled For a world-wide movement for the abolition of meat. 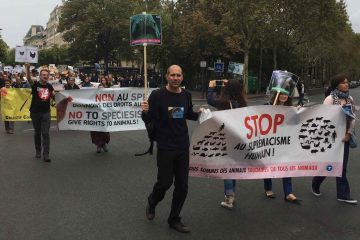 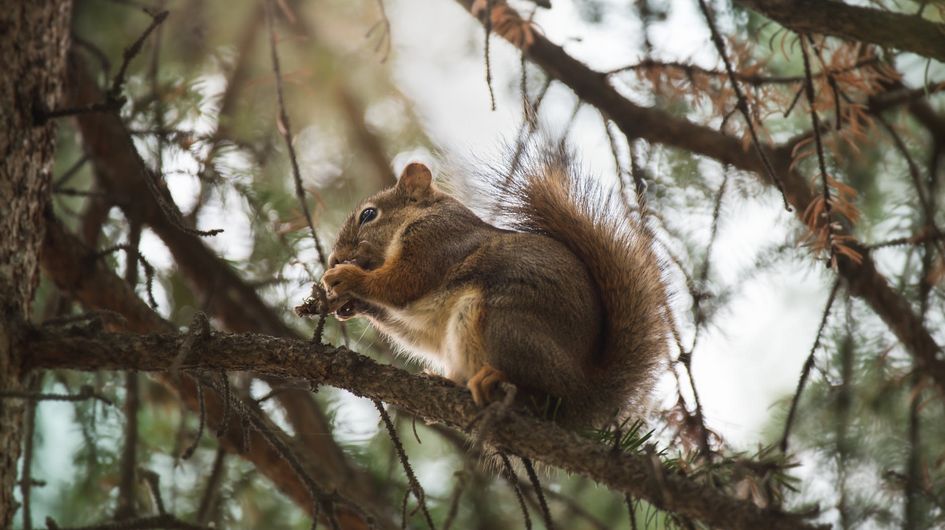 The core of antispeciesism is clear, easy to communicate, and much follows from it in terms of the practical implications.