Aquatic animal specialists point out the ravages of fishing and fish farming around the world. It is time to reconsider the validity of these deadly practices for these animals, who are endowed with sensitivity and memory1.

We abduct fish from their world and let them die in ours. In fishing and fish farming, we exert a ruthless domination on a universe we know almost nothing about – the world of aquatic animals. Who are the fish?

Since they stay silent and do not have facial expressions, we struggle to take fish seriously.  Most often, humans feel little or no empathy for them. Their suffering is usually denied, hidden or both. The phylogenetic distance that separates us from them makes compassion harder for us, but this fault is ours. Scientific discoveries should lead us to rethink our prejudices and attitudes. 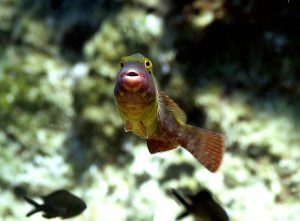 A parrot fish, which lives in the depths of the Mediterranean (Photo: Tarik Tinazay, AFP)

What science can teach us about fish

Fish and many other aquatic animals (lobsters, shrimp, crabs, squid, octopuses, cuttlefish, etc.) are sentient beings with their own subjective experience of the world.

They can feel pain. Trout injected with pain-inducing substances are more restless than those injected with placebos, and morphine calms them down2. Many fish show that past suffering influences their present behavior3, for example by avoiding places where they have received electric shocks in the past4.

Contrary to widely held beliefs, fish do have long-term memory. After a single high-tide event, gobies remember the locations of cracks and gaps in the sea floor where they can find shelter at low tide5.

The social behavior and capacities of fish is much more diverse than we usually assume. They can recognize individuals both from their own species and from other ones using their sight, hearing and sense of smell. Like us, they develop affinities with animals from other species6, less aggressive individuals usually being preferred as friends.

Finally, fish can learn and do not behave purely out of instinct as people often assume. Rather, they exhibit lifelong learning abilities and even develop specific group cultures7.

Whether it’s longline fishing, recreational fishing or bottom trawling, the ways in which we catch and kill fish are as diverse as they are horrible. Exhausted by prolonged efforts to flee, maimed by hooks or crushed under the weight of other fish in nets, their organs often explode from decompression  when we hoist them up from the depths. Those who survive this will die from asphyxiation. Whether they are members of the species targeted by fishermen, or simply “bycatch” accidentally caught in their nets, their fate will be the same.

Fish farms are just as brutal. Hundreds of billions of fish live short, miserable lives, packed in underwater cages, basins or tanks. Some fish farms are prisons to half a million animals. Their lives in these overcrowded conditions are full of stress, frustration and aggression. Injuries are frequent and the animals are afflicted by flesh-eating parasites and constant infections. Mortality rates are higher than those of the worst factory farms.

Do we really need to do this? We rarely ask whether fishing and fish farming are justified, even though these practices involve the massive killing of sentient animals. Nothing entitles us to kill trillions of animals who care about their lives just as we care about ours. The distance that separates us from them does not justify our practices.

Although more and more people are speaking out against the injustice happening in slaughterhouses, we tend to forget the floating abattoirs we usually call “fishing boats”.

The first World Day for the End of Fishing, March 31th, 2017, bears witness to the fact that people are starting to ask important moral questions about fishing and fish farming.

On the occasion of the World Day for the End of Fishing (and fish farming) in March 2018, various researchers and academics of the world specializing in aquatic animals are alerting to the horror of these practices.

As more people become aware of the sensitivity of fish, fish will begin to receive the compassion and respect they deserve.